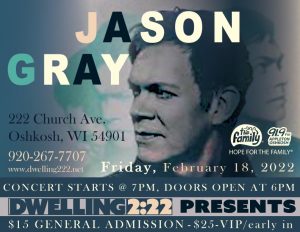 Buy Tickets Here!
Jason Gray returns to the stage at Dwelling 2:22, featuring new songs and a new show.  Hailing from Minnesota, his journey to being a household name in Christian music was not an easy one. Like many “overnight successes”, Jason started in youth ministry in 1993 before launching his full-time music ministry. It wasn’t until 2007, when his album, “Everything Sad is Coming Untrue” climbed into the top 20 before he was starting to make waves.
2010 brought “MORE LIKE FALLING IN LOVE” which topped out at #5 and then the song for which he is best known (so far), “REMIND ME WHO I AM” came out in 2011 and made it to #4. His latest album, ORDER, DISORDER, REORDER is a three-CD set that tracks his journey and resonates with many of us.
Tickets are $15-general admission; $25-VIP/early in and are available at iTickets or by calling 920-267-7707 (to avoid ticketing fees).
Scott Wesley Brown
Friday, March 4th, Doors open at 6 pm, concert starts at 7 pm

Free tickets here!
Legendary Christian artist, Scott Wesley Brown brings his iconic sound to the stage at Dwelling 2:22 on Friday, March 4th , 2022. A prolific lyricist, his songs have been covered by Petra, Pat Boone, Bruce Carroll, Sandy Patty, Amy Grant, and even Domingo Placido Domingo. He has recorded 25 albums and played in 50 countries. However, so that EVERYONE who wants to attend may come, there will be NO CHARGE for this concert, but a free-will love offering will be taken.
The titles may not ring a bell, but when the song starts, you will find yourself singing along. Outside of keeping a very busy concert schedule, he has served as a worship pastor in San Diego, taught many worship and mission seminars, and was ordained in 1998.
Some of the songs you may be familiar with include “Yeshua Ha Maschiach”, “Keep the Son in Your Eyes”, “He Will Carry You”, “When Answers Aren’t Enough”, “All Rise”, “Look What God is Doing” and his funny, yet convicting, “Please Don’t Send Me to Africa”. One of the first artists to play Lifest, he also wrote numerous worship songs for the PromiseKeepers in the ’90s including “Godly Men”, featured at their 1995 nationwide conferences. He has been nominated to receive Dove Awards, six times
Adelaide
Friday, March 18th, Doors open at pm and the concert starts at 7 pm

Free Tickets Here!
Adelaide (Laura) is at it again! She is excited to be releasing a solo album and sharing the new songs (along with singing favorites from past albums) with YOU!  So that EVERYONE who wants to attend may come, there will be NO CHARGE for this concert, but a free-will love offering will be taken.
Nationally known, internationally followed, she has scored hits with “FEET OF JESUS”, “DEEP WATERS”, “THE BIGGER PICTURE”, “STRONG+BRAVE”, and “MY MIRACLE” (with JJ Weeks). Veterans of FIVE appearances at Lifest, numerous national tours, and several highly acclaimed and received CDs. She will ignite the stage with passion, purpose, and God’s power. You know her sound, you know her heart, you know her ministry, so come out and celebrate the new project and worship, one night only in Oshkosh @ Dwelling 2:22.